SIA Calls for National Strategy to Spur Internet of Things

At a forum on Capitol Hill earlier today, SIA and other tech and business leaders called for a national strategy to harness the immense potential of the Internet of Things (IoT), the semiconductor-enabled network of devices connected to the cloud from which data can be collected and analyzed, and to ensure U.S. leadership in this burgeoning technology.

SIA President & CEO John Neuffer, along with representatives from the Information Technology Industry Council (ITI), the U.S. Chamber of Commerce, and semiconductor industry leaders Intel and Samsung, highlighted the release today of a report outlining the steps policymakers in Washington should take to realize the transformative benefits of the IoT across countless applications. These applications include wearables, smart homes, medical electronics, industrial automation, connected cars, smart cities, and many more. Semiconductors are a key enabling technology for the IoT. 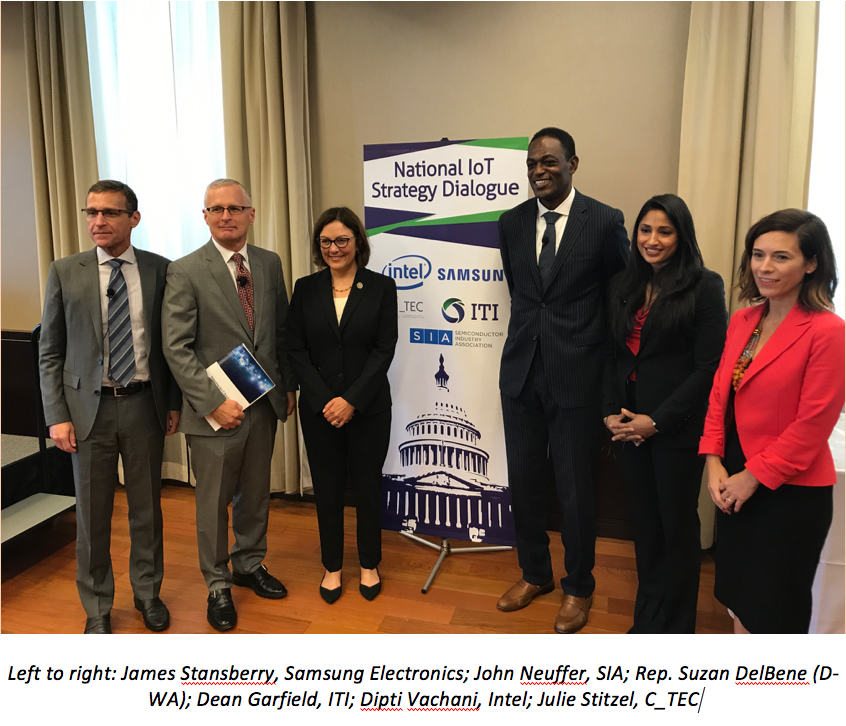 The overarching recommendation from the report is that the U.S. government should work with industry to establish a long-term national strategy that will enable America to lead the world in IoT. Specific recommendations discussed today include:

At today’s event, Neuffer underscored the foundational role of semiconductors in enabling the IoT and the urgent need for robust government investments in basic research to supplement industry investments that aim to spur growth in emerging technologies like the IoT. The U.S. semiconductor industry invests nearly one-fifth of revenue in R&D annually, among the highest shares of any industry.

SIA looks forward to working with policymakers to advance a national IoT strategy that brings to fruition the tremendous benefits of the IoT across virtually all areas of society and ensures that the United States leads the world in harnessing this transformative technology.